Sometimes clients need retirement funds before 59½, but breaking any of the governing rules for 72(t) payments will mean paying taxes waived under the program. Here is how to steer clear and stay compliant with the most recent IRS regulations.

According to the Government Accountability Office, at least $69 billion were withdrawn from retirement accounts by individuals ages 25–55. These amounts are subject to a 10% additional tax (early distribution penalty), unless at least one exception applies. One exception is distributions taken as substantially equal periodic payments (SEPP). SEPP must adhere to a strict set of rules, which, if broken, could mean owing any penalty waived under the program.

SEPP are called 72(t) payments because they are governed by Internal Revenue Code Section 72(t). For ease of use and because of familiarity, “72(t) payments” will be used in the rest of this article.

Are 72(t) payments right for your client?

Despite the obvious benefit, careful consideration must be given to the decision to start 72(t) payments. A key determining factor is that 72(t) payments must continue for five years or until the account owner reaches age 59½, whichever is longer. If the financial need is short-term, it might be more practical to pay the 10% penalty on the amounts needed to finance that need, instead of being locked into long-term 72(t) payments.

If it is determined that 72(t) payments are suitable for a client, the advisor in the relationship should consider providing the client with a list of do’s and don’ts for maintaining compliance. This can help to ensure that the client does not engage in a transaction that could result in a modification. A modification would void the 72(t) payment arrangement.

The following overview of some of the key rules is a good start to creating your list of do’s and don’ts.

1: 72(t) payments should not be made for someone who already qualifies for an exception to the penalty

This might seem obvious to an advisor. But a client might not know that they already qualify for an exception. One that is often missed is the age 55 exception. Under this exception, distributions from an employer-sponsored retirement plan (employer plan) are exempt from the 10% early distribution penalty, if the following two requirements are met:

Someone who qualifies for this exception, but is unaware, might think that they need to take 72(t) payments to qualify for the exception.

The summary shown in Figure 1 can help you determine whether an exception is available for one type of retirement account or both.

2: 72(t) payments must be calculated using an IRS-approved formula

An IRS-approved interest rate must be used for the amortization and annuitization methods. The interest rate is capped at the greater of:

The 5% rate is newly added under IRS Notice 2022-6. Previously, only the federal mid-term rate was available.

For the federal mid-term rate, the rate for either of the two months immediately preceding the month in which the distribution begins may be used. For example, if the payments will begin in November, the rates for either September or October may be used.

3: The payments must be the same each year

With the annuitization and amortization methods, the 72(t) payments would be determined in the first year, and the same amount must generally be distributed for each year of the program. On the other hand, the amount determined under the RMD method would change each year, because the calculation method is like that which is used for RMDs, and the amount is refigured for each year of the program. When calculating an RMD for a year, the fair market value of the account for the end of the previous year is divided by the life expectancy factor for the year for which the amount is calculated.

Planning tip: It is practical to run calculations for all three methods to see which works best for your client.

50-year-old Jim had retired from his job with Big Corp. He has enough saved in his IRAs for retirement and plans to take annual distributions to cover living expenses. Jim transfers $500,000 to an IRA to cover the 72(t) payments.

Using his life expectancy factor of 36.2—based on the single life expectancy table—and the maximum allowed interest rate of 5%, the calculated amounts for each calculation method are as follows: 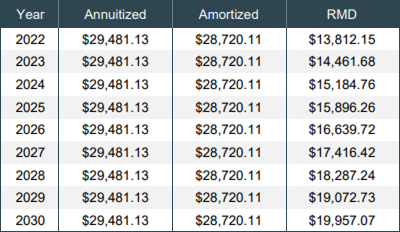 Planning tip: Jim may choose from either of the three methods. Ideally, the method chosen would be the one for which the result is closest to the amount that Jim needs.

Reminder: The actual amount under the RMD method for years after the first year will be different from what is shown in this table because that amount would be refigured each year.

Generally, once a client starts 72(t) payments, the payments must continue using the calculation method initially chosen for the duration of the program. An exception provides a one-time opportunity to switch from the annuitization or amortization method to the RMD method.

4: 72(t) payments must be taken at least annually

A client’s 72(t) payments may be taken monthly, quarterly or at another frequency that is not less than annually. Taking the payments every two years, for instance, is not permitted.

Once a client starts taking 72(t) payments, the payments must continue for five years or until the client reaches age 59½, whichever is the longer period. Should the payments cease before the deadline, all the penalties previously waived under the program would be owed to the IRS—plus interest. However, these penalties and interest are waived if the payments are stopped because the account owner dies, becomes disabled, or the account balance is depleted due to taking the 72(t) payments.

6: No other distributions or additional payments allowed for 72(t) payments account

Unless the account owner qualifies for an exception, no other distributions may be made from an account from which 72(t) payments are being made.

Exceptions include certain distributions that qualify for other exceptions under Internal Revenue Code Section 72(t).

Should you recommend 72(t) payments for a client?

Advisors generally do not encourage their clients to take early distributions from their retirement savings. But understandably, it is sometimes unavoidable. In those cases, it is practical to work with clients to implement strategies that help mitigate any tax impact, including the early distribution penalty.

If it is determined that a client does not qualify for any other exception and is an ideal candidate for 72(t) payments, then providing a detailed explanation of the applicable rules that must be followed to ensure the successful execution of the payments is often necessary. Breaking any of the governing rules could cause the client to owe all the penalties that were waived under the program.

These high-level explanations cover only some of the rules that apply. IRS Notice 2022-6 provides helpful details.

Definition A deduction is a Tax write-off which is allowed for contributions to traditional IRAs or employer sponsored plans. Individuals who are active participants are

Definition A SIMPLE 401(k) plan is a 401(k) plan  established by a small business for it’s employees. Earnings accrue on a tax-deferred basis and distributions